Guitarists have their Les Paul’s, and pianists have their Steinways; no matter what instrument you play, musicians all have their favorites. Vocalists are no different. Not all microphones are made for the same purposes and uses, and there are a variety of microphones available solely for recording. But how can you know which is the best microphone for vocals?

In this guide let me walk you through the things you need to know to make a good selection, and some of the top choices..

Microphone language to keep in mind

You want to get blown away by how incredible your voice sounds when you’re singing into the mic, not by what the salesperson is saying.

Learning a couple of key phrases will help you stave off the confusion from not knowing how to talk about mics.

The sensitivities and frequencies of microphones

The job of the microphone is to pick up sound, and in this case, your voice. So you’ll want to make sure you get a microphone that can do it at the sensitivity and frequency levels that match your voice.

Sensitivity refers to the range of sound that a microphone can pick up. The lower the number of sensitivity, meaning the volume, the more sensitive a microphone is.

Microphones might come with an SPL or a “sound pressure level.” You can think of this as the opposite of sensitivity: the higher the SPL, the more volume a microphone can take.

Some microphones have specific frequency responses, meaning they pick up some frequencies better than others.

Frequency is measured in hertz, often written as Hz. For vocalists, a microphone with a frequency response of between 80 Hz and 15 kHz (kilohertz) would probably be an excellent place to start.

Microphones will be described as either being a flat response microphone or a shaped frequency microphone.

Flat response microphones have the same level of sensitivity to sounds of just about all frequencies, whereas shaped frequency microphones are more sensitive to certain sounds and less to others.

For vocals, it’s usually better to go with shaped response microphones and choose one that matches your voice’s frequencies.

When shopping for microphones, you’ll hear them described as either dynamic or condenser microphones.

Dynamic microphones are the older type of the two. It uses a simple design to produce sound, which amounts to a coil or spring in the microphone that moves to create sound.

This simple design means you don’t need an external source of power, and this also means these microphones are usually a bit cheaper.

Dynamic mics have lower sensitivity, meaning they’re better for louder sounds. If you’ve ever been to any sort of a live gig or concert, you’ve probably seen the lead singer use one.

Having lower sensitivity also means that these microphones are not as great at picking up subtle differences in sound. They might be great for a loud concert hall where you don’t want tons of feedback, but it might also mean that your voice doesn’t sound all that great in the recording studio.

Condenser microphones – you guessed it! – are precisely the opposite of dynamic mics.

It has higher sensitivity, allowing it to pick up sounds that a dynamic mic might miss, for example, a singer’s vibrato in a studio recording booth.

With the extra electricity, the condenser microphone can register much more delicate sounds than the dynamic microphone. This makes it the ideal option for singers that are recording in a quiet space where they don’t have to worry about external noise.

Diaphragms in microphones: the part that registers sound

Both types of microphones have a part called the diaphragm.

The diaphragm is a flat, thin piece that each microphone has. It vibrates when sound hits it to make a sound.

In dynamic microphones, the functionality is pretty simple – sound vibration hits, the diaphragm vibrates, and, voila, a working microphone.

Condenser microphones will have one of two types of diaphragms: large or small.

Polar patterns: Do microphones have poles?

All microphones capture sound, but the direction from which they capture sounds is what’s known as their polar patterns.

But we’re most interested in the last type of microphone: the unidirectional microphone.

This might sound silly to have to say out loud but there are times when it’s really useful to have a microphone that captures sound from one, controlled direction.

That way, if you’re the lead singer in a band, your microphone is picking up your voice and your voice alone, not the guitar next to you or the drums behind you.

Unidirectional microphones can be broken down into cardioid, supercardioid, and hypercardioid microphones. Just to keep things simple, so long as you hear the word “cardioid”, know that you’re in the right place.

So now that we’ve covered what you need to know before even stepping into the store or going online to shop on Amazon let’s break down a couple of big names.

A few dynamic microphones to look out for

As explained, these are the heavy-duty microphones that you want to go for if you’re into a live performance or simply like the rough quality of sound these microphones tend to deliver.

Just about everyone on the planet Earth has seen a Shure SM 58 in action, even if you might not recognize the company or the name.

The single most classic microphone – dynamic or condenser – in existence, the SM 58 still does the job, even if it’s not the sexiest of microphones.

The SM 58 and SM 7B, both dynamic microphones, are similarly incredible performers and will not let you down.

The key advantage of both of these microphones is that they are extremely inexpensive.

For anyone who’s just getting started or on a budget, you really cannot go wrong with Shure, and especially not with the SM 58. 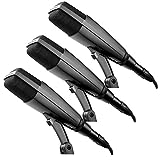 The other dynamic microphone featured on this list, the Sennheiser MD 421-II is a great upgrade from the entry-model Shure SM 58 or SM 7B.

With an SPL of 150 dB+, this microphone is great for anyone who’s planning on singing really loudly. The microphone’s cardioid polar pattern will help reduce feedback on stage and really zone in on your voice.

Sennheiser makes great audio products overall, and you should look into their other auxiliary items like cables if you haven’t already.

For the studio singers, here are your condenser microphones.

Next, we have a bunch of condenser microphones, and it’s a good range that covers both budget and performance. 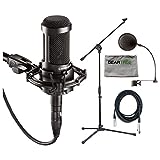 Great performers on a budget, both the AT2035 and the NT1A will do the job. Audio-Technica and Rode are both reputable companies with a great handle on what makes a great product.

The AT2035 is a condenser microphone with a cardioid pattern and frequency response at 20 to 20,000 Hz.

The NT1A similarly is a condenser microphone with a similar cardioid pattern, but a slightly higher frequency, making it a better choice for certain vocalists.

With the AT2035 available for about 150 USD and the NT1A sold for roughly 300 USD, these are great entry-level studio microphones for anyone looking to set up their first home studio.

We’re taking a serious step up with AKG.

One of the kings of studio microphones, AKG has produced hit after hit with its great microphones.

With the AKG C12, you get a condenser microphone with multiple polar patterns available. It’s a great microphone for picking up mid-frequency sounds, like deeper male vocals.

The AKG C414 and the C314 promise even more versatility; both condenser microphones will capture a great sounding recording and offer different polar patterns.

However, AKG isn’t the most expensive brand of microphones out there though. Enter the one and only: Neumann. 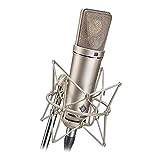 Arguably the gold standard when it comes to studio microphones, Neumann microphones also cost the most.

You get what you pay for though, as the saying goes. Just as there’s no doubt that you’re going to pay an arm and a leg, you can rest assured that you’re getting quality with Neumann.

Their original flagship unit was the U 47, a classic workhorse that had no rival in its day. It was replaced by the U 67, another all-rounder that works with vocalists of all ranges and styles.

The U 87 follows the pattern of Neumann’s legacy of quality, a great condenser microphone with multiple polar patterns. The ‘Figure 8’ polar pattern can be used effectively for duets or ensemble recordings.

More uniquely, the TLM 102 has an SPL of 145 dB; not comparable to dynamic microphones, but certainly more than enough for studio performances of genres that require a bit more oomph, like rock or heavy metal.

Never, ever, forget the name Neumann when you’re shopping for microphones.

Just as there are great all-around microphones, like the ones from AKG, Neumann, and even the entry-level microphone from Rode, there are other microphones that were made for a specific purpose.

The C-800 G from Sony is a great example of this. It’s a condenser microphone with omnidirectional, bidirectional, and cardioid polar patterns.

This microphone was engineered to be the microphone of choice for R&B and hip-hop artists. Its large diaphragm and high sensitivity work great for that genre of music.

If hip hop is your jam, you’ve got to take a look at this entry.

A couple of take-aways about recording vocals

Don’t forget to invest in a pop filter, shock mount, and proper microphone stand when you finally decide to buy that dream microphone.

You’ll want to put most of your money into buying the microphone itself, but without it set up properly, you’ll be left with an amazing microphone and no way to use it.

A pop filter is a thin layer that is clipped to your stand and is propped up between your mouth and the microphone. It seems trivial but helps keep the plosives from all your ‘P’s’ and ‘T’s from destroying everyone’s eardrums.

A shock mount and stand can probably be purchased together, to be simple. The right fit with your microphone will save you a lot of hassle in the long run.

What a shock mount basically does is keep your microphone in place while you’re rocking out. If your microphone keeps rolling around as you’re bouncing up and down, your final product is going to be less than desirable.

Lastly, have fun. If you decide to go all-in with one of the Neumann’s on this list or end up starting with the SM 58, the important thing is that this is something you’ve set out to do, and now you have a mic to do it on.