The Tascam DP-03SD is a budget-friendly digital recorder, and successor to their popular DP-03 model. This device is ideal for creating CD quality music recordings and transferring them to an SD/SDHC card quickly. It features the high quality internal components that Tascam is known for, but at a lower price point.

Who is the Tascam DP-03SD For?

The Tascam DP-03SD is a great choice for musicians or producers who would like to get started with Tascam’s Portastudio line while also enjoying the added features this device offers. The DP-03SD allows users to create stellar quality recordings without requiring a computer. This makes it a useful option for people who wish to record on-the-go.

The Tascam DP-03SD packs an array of great features. This includes:

The DP-03SD features a simple but intuitive design that is similar to other cassette MTR devices. However, it is also capable of performing 8-track recordings while using 2-channel inputs simultaneously. Its XLR terminal is ideal for plugging in condenser microphones.

The device also features TRS phone terminals for connecting guitars, keyboards, and other instruments. This makes it great for band recordings that feature multiple instruments at once.

Musicians and producers who would like to record without using external inputs will also benefit from the Tascam DP-03SD’s built-in pair of condenser microphones. These mics were created using the same technology Tascam utilizes in its other portable recording devices.

Each input in the Tascam DP-03SD is equipped with its own pan knobs, level faders, and controller. Users can instantly reverb effects to their tracks without requiring a computer.

The independent EQ knobs also allow users to mix down their tracks on the fly. The combination of these features enables you to create professional quality tracks using the DP-03SD as a standalone device.

Each track recorded with the Tascam DP-03SD can be sent to the device’s stereo reverb processors. Users can also fine-tune their sound with the help of the two-band shelving EQ. Once your mix is ready, you can transfer it to your computer via USB 2.0 for additional touch ups.

The built-in tuner is great for guitarists who would like to tune-up and get ready for recordings without having to plug into an independent tuner. The built-in metronome is also fantastic for recording tight-sounding tracks on-the-go. 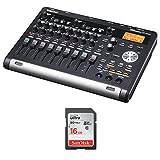 The Tascam DP-03SD is one of the more affordable recording devices at its current $319.00 price tag. Similar devices such as the Zoom PodTrak P8, Zoom LiveTrak L-8 Podcast Recorder, and Zoom LiveTrack L-12 Digital Mixer and Multitrack Recorder retail for several hundred dollars more than the DP-03SD.

The Tascam DP-03SD does feature some minor drawbacks and limitations. The device’s display does not show the track number when a recording is loaded. This can make the recording and editing process somewhat frustrating when working with multiple tracks.

Unlike Tascam’s earlier devices, the DP-03SD does not offer users the ability to save the punch-out marker. Users will therefore need to manually hit the stop button when they wish to end a recording. However, it is possible to make this process easier by pairing the device with a Tascam RC3F 3-Way Footswitch.

The customer reviews for the Tascam DP-03SD are overwhelmingly positive. Many of the five-star reviews on Amazon praise the device’s stellar build-quality, portability, and quick recording features.

Many have also noted that the built-in reverb effects sound incredible and add richness and color to recordings. The bouncing capabilities also allow users to bounce all eight tracks down to just one or two.

Some one-star reviews on Amazon have pointed out that the lack of punch-out marker makes recordings difficult without the use of an additional footswitch. Users have also complained that volume knobs on each input produce a crackling noise when rotated.

One reviewer also points out that the device’s input signal runs hotter than it should. This causes mic and instrument levels to peak, even with the input volume knob all the way down. This can be a problem for musicians and producers who wish to record without using external input pads.

The Tascam DP-03SD is a great portable recording device for the price. It is a smart choice for any musician or producer who wishes to record on-the-go. It’s intuitive controls make recording a straightforward and efficient process.

Consider checking out this device if you want to create CD-quality recordings without bringing along a computer.