Have questions on the MDX2600? Thankfully we have all the answers you need in our Behringer Composer PRO-XL MDX2600 review.

Behringer has been making quality audio equipment since 1989, but their relationship with music actually goes back to 1961. That’s more than 25 years of musical experience.

A brand with that kind of history is usually a safe bet for two reasons. One, they are still passionate about this industry after almost three decades. And two, they’ve stayed at the top of their business for this long, so they must be doing something right. 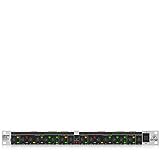 Behringer makes a range of equipment, from amps to mixers, headphones and electric drum kits. From a recording standpoint, one of the most popular pieces of equipment they offer is the Behringer Composer PRO-XL MDX2600. Why has this model stood the test of time? Let’s take a closer look.

What Can the Behringer Composer PRO-XL MDX2600 Do?

A lot! One of the things that users comment on time and time again is how many functions are available and how much control the MDX2600 gives you over your sound.

Behringer endorses this machine as a pretty versatile piece of equipment. It’s actually a few machines in one: a dual-channel expander, gate, compressor, and peak limiter. What does that mean for you? With this one piece of equipment, you’ll have almost everything you need for studio-quality processing.

Here’s a list of just some of the things it can do for your recordings: compressing mono and stereo signals with no noise suppression or loss of high frequencies, enhancing vocal presence and energy, and finally, limiting and smoothing out signal peaks.

That’s not all. It’s also a dynamic enhancer, de-esser, low-contour filers, and does switchable tube simulation. You’ll find a lot of applications for this compressor in your studio.
We know that’s a lot of information! Let’s find out how it all works and what it means for your audio.

Do I Need a Behringer Composer PRO-XL MDX2600?

It really depends on the kind of studio you have, what your end goal is, and what kind of recordings you want to make.

We’ll cover the basics then break it down a little further, explaining the specifics and why they matter. Once you have all the information, it will be easier to make a decision.

Paul White gives a great explanation of what the MDX2600 is all about. One of the things that immediately stands out is the controls. As he points out, they’re relatively simple and straightforward. Here’s a little more information about how it works.

First of all, there are two channels for this machine. They’re identical and can be switched between expander and gate mode. This is controlled by a simple switch, and there’s an LED display that clearly shows you whether you’re in expander or gate mode.

The compressor has the typical things that you might expect: threshold, ratio, attack, release, and output controls. But it doesn’t stop there. To make it more versatile, extra buttons have been added as well as some automatic controls. We’ll get more into more detail on those later.

You’ll find a knee adaptation on the console, too, which is a switch that combines both hard- and soft-knee compression. Plus, you get a low contour button to keep low frequencies from dominating the process, which they tend to do. It tones them down so high-frequency sounds can get through.

To give your sound a more retro feel, there’s a tube button to simulate warmth by adding in soft saturation. The enhancer button keeps the high-frequency tones intact. This makes sure the sound isn’t dulled during compression, something especially necessary during heavy compression.

That’s not all, there are controls that monitor the compressor side-chain as well as switch to the external signal if you would rather use it. There’s also a separate gain reduction meter and a meter consisting of three LED lights that let you know how close the input is to the threshold.

The de-esser had simple controls – a simple switch to go between males and females and a single knob to control the attenuation. There’s also an LED meter to let you know how much de-essing is being done. This one has four lights.

That, in a nutshell, is what the Behringer Composer PRO-XL MDX2600 is all about. Now, let’s look into some of its most impressive features in-depth.

What Is a Switchable IKA?

The MDX2600 has a switchable interactive knee adaptation (IKA) so you can get the benefits of both hard- and soft-knee compression. So, what’s the difference between those two?

According to Sweetwater, the knee is how quickly the compressor stops a signal once it goes past the predetermined threshold. Why is it called a knee? Because when it’s graphed, the line turns downward and resembles a bent knee.

As Joe Gilder explains, if you want the compressed sound to sneak up on you, use a hard knee. The MDX2600 is adaptive and combines the advantage of both hard- and soft-knee compression so you’ll be able to get the transitions you want.

Being able easily to apply each of these effects is one feature of the MDX2600 that adds to its versatility. Plus, the controls are easy to use which makes it a lot easier to apply this technique when you’re mixing your audio.

What Are the Benefits of Automatic Gain Control?

Gain is difficult to define. Basically, it’s an increase in signal from the circuit you’re using to record before it actually goes into any of the other components of your setup. When you adjust gain, you’re changing the preamp and how it’s going to cope with the incoming information.

If it’s too low, the overall signal into your digital audio workstation will be too low. There will be a lot of noise and the quality will be poor. If it’s too high, you can actually clip the signal and cause serious distortion.

It’s important to understand the difference between gain and volume and how they relate to one another. According to Aaron Staniulius, an easy way to think about how they relate is to consider your sensitivity.

For example, if you need to hear the lead singer a little more, you turn up the sensitivity on that mic, not the volume. You want the input to your system to sound as good as it can, not as loud as it can.

Does this all sound a little complicated? Well, no need to worry. Because the MDX2600 has an automatic gain control, so you have one less thing to worry about. Not only will you be able to get reliable protection against signal peaks but also boosts when it’s too low, without you having to worry about it.

What about Interactive Ratio Control?

If you understand simple ratios, this is a pretty easy component to grasp. When recording, the ratio is the input signal level compared to the output signal level. It’s set ahead of time. This ratio tells the compressor how far apart to keep the input and output.

How does it work? According to David Mellor, the compressor actively lowers all signals that go above the threshold while maintaining the input to output ratio that’s been chosen. If the ratio is 1:1, what comes in is the same as what goes out. 2:1 and the input is always going to be twice as much as the output.

As a simple example, let’s say the threshold is set to 60. Your input surpasses this and goes to 80 while your ratio is set to 2:1. Your output would then be 40. To get the input below the threshold, the compressor would bring the input down to 60 and the output down to 20, maintaining the 2:1 ratio.

While some compressors don’t have a ratio control, you don’t have to worry about that with the MDX26000. Not only does it have ratio control, but the features operate automatically so your audio is as clean as possible.

What Other Features Give the MDX2600 an Edge?

There are so many other components of this compressor that can help you get more professional-sounding recordings. While we aren’t going to be able to get into all of them in detail, we wanted to make sure to point out some of the highlights, like:

What People Are Saying

User reviews are pretty positive. Most people agree that this is a great value buy. You can usually get it at a really fair price, as we’ve seen, it’s extremely versatile.

Like mentioned before, people comment a lot about how much control the MDX2600 gives you. There are a lot of sound aspects you have control over. There are a lot of automatic settings too, so you can let the machine handle a lot of the fine-tuning if you prefer and are able to give up a little bit of that control.

People use the MDX2600 for a lot of different applications. Recording music and vocals live and in the studio is, of course, one of the most common. But if you’re looking for something to record podcasts or do sound for online videos, this is a great choice, too.

Even people who admit they’re not huge fans of other equipment from this company really love this compressor. The sound quality difference with this composer is apparently very obvious.

Overall, this is a huge upgrade from the original and gives you a lot more than you would think for the price. It’s an above-average machine that doesn’t really have any huge downsides. It’s also durable and well put together so it will last a long time.

Should I Buy It?

If you’re looking for a machine that gives you a lot of options to improve your sound at a reasonable price, then this might be the perfect machine for you. We’ve given you a lot of information to consider. Keep all this information in mind as you decide if it’s a fit for your budget and your studio.