Studio monitors are a key component in bringing together the best sound and mix for any recording. There are those who argue it’s possible to get a decent sound from a lower-priced studio monitor, but as with so many things in life, you truly do get what you pay for.

Studio monitors under $300 should offer incredible clarity of sound, a great frequency response, and range, and they should be lightweight enough to mount properly.

That’s exactly what these 5 studio monitors under $300 offer. There are going to be higher-end monitors from which to choose, as there are plenty of even more inexpensive models on the market, but the price range of being just under $300 offers some of the highest quality monitors that offer the best in clarity and function.

IN A HURRY? HERE’S OUR TOP PICKS! 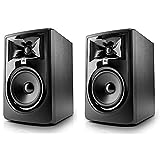 This is our pick for overall best studio monitors.

JBL is a well-known name within the speaker and monitor industry, with a reputation extending back decades. When people think of quality speakers, JBL is one of the names at the top of the list.

That hasn’t kept the company from competing against more affordable monitors, though. In fact, JBL 305P MkII delivers on multiple fronts as a powerful studio monitor.

These 5” (5-inch) speakers incorporate JBL’s new Image Control Wavelength technology, which is essentially a fancy way of saying it brings in quality as well as depth to the sound. High-performance system components deliver a level of clarity that isn’t all that common among studio monitors coming in at a lower price point.

In fact, the clarity produced through these JBL’s rivals studio monitors doesn’t cost a pretty penny more. The frequency range of these 305P MkII extends even beyond what the human ear can hear.

This is our pick for second best studio monitors.

The name may be a bit sophomoric, but that shouldn’t deter from the quality it offers. One key advantage that iLoud offers against its competitors are mobility. Similar in design and mobility to desktop speakers, the IK Multimedia iLoud Micro Monitor provides the sometimes needed luxury of bringing it wherever it’s needed.

The frequency range of iLoud monitors runs between 45Hz to 20kHz, offering a great benefit to the most discerning ear.

This is our pick for best studio monitors for beginners.

Another name on this list that may appeal to a different subset of recording artists is the Rokit 5. The third generation of the Rokit 5 takes everything that was optimal about its predecessors but ramps everything up a few notches.

A major draw for these studio monitors is the design. A unique appearance and color combination delivers high-quality sound and can handle being pushed to their upper limits. They utilize a 5” low-frequency driver to thunder the low-end frequencies and offer a great response.

One thing to note about the Rokit 5, though, is that these tend to be better options for beginners as the frequency range doesn’t match some others on this list and the low power does limit its volume and punch.

This is our pick for best cheap studio monitors.

The Polk T15’s are easily some of the best studio monitors you can buy. While these are technically under the $300 price range, these are labeled “Best Budget” as they are far cheaper than $300.

I personally have these and can testify to their capabilities. They deliver the high-quality sound that they promise with incredible acoustics. While the low-end and bass could be better, these monitors are exactly what you need to mix and master anything and everything you create in your home studio.

Or like me, you can just listen to your favorite albums and enjoy the crisp sound quality on the Polk T15’s.

How to Setup Your Studio Monitors

Depending on whether the studio is mobile or fixed, the position of the monitors can change. For a fixed studio, it’s optimal to have the monitors positioned in front of the mixing console (mixing board), at or slightly above the user’s head, and the center point of the speakers should directly face the ears of the mixing master.

The monitors should also be spaced apart enough to avoid bleed or a blending of left and right sounds (which would limit stereophonics). This may result in a spread of six to eight feet, but anything less than five feet (or more than eight) can limit the effectiveness of those monitors.

The angle of the monitor horizontally should be slight, just enough to angle the speaker directly toward its respective ear. Vertically, they should also pitch slightly to ensure the same desired result.

A properly set up, high-quality studio monitor is going to produce clarity, response, and a great range, ultimately offering the best chance at an exceptional finished product.

When people start out with home recording systems, there’s a lot to learn. It’s going to take time to not only find the right recording software but the speed and capacity of the computer system matters. Then it’s about the mixing console, interfaces, effects racks, EQs, and so much more.

Headphones and monitors are a vital factor in bringing together the best overall sound, not just during the final mixing, but also while recording -be it instruments, vocals, or some other sounds.

Relying on cheap studio monitors is going to pose a number of problems for any recording professional or amateur. Most beginners aren’t likely to notice the differences when they’re first starting out, but in time they will begin to discern the key factors that make up a high-quality sound.

Even though a budget might be tight and there are numerous components to acquire when building out a studio, the monitors should be one of the most important things to focus on as far as quality. The mixing console, computer interface, and even the software can be upgraded (and most will be more than adequate for nearly every beginner to intermediate), but the monitors are the centerpiece.

Having quality monitors in place is going to immediately step up the quality of sound from the get-go.